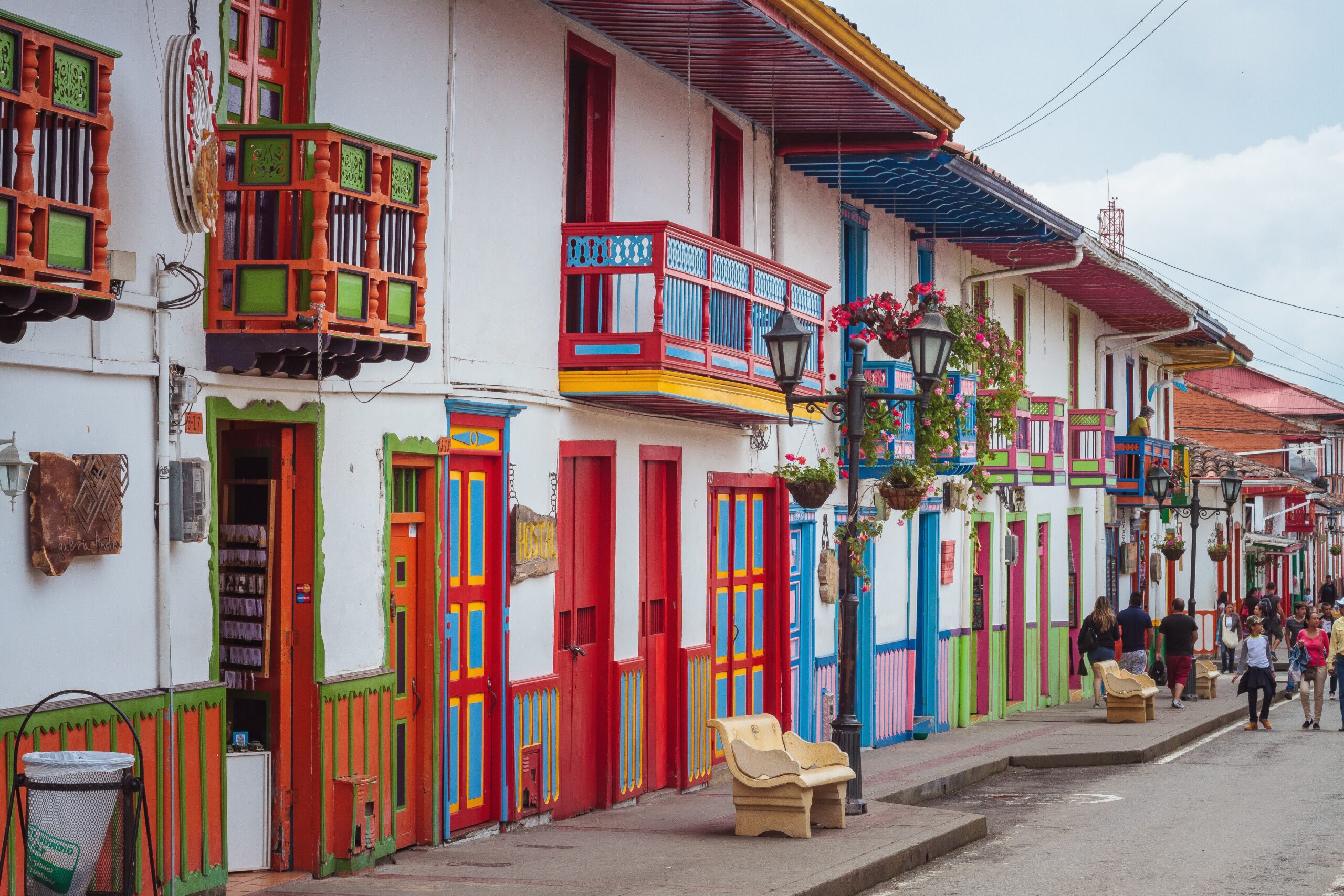 Lying in the Central Mountain Range, among overflowing coffee plantations, is the department of Quindío, one of the smallest in Colombia, whose reduced extension is totally opposite to the endless list of natural resources and tourist attractions that motivate its frequent visit. In addition, the region has a series of advantages to make your journey more pleasant; among other things, due to the proximity between the destinations and the good and varied alternatives to reach them.

Including Armenia, the capital, the department is made up of 12 municipalities.

Everyone is reached, for everyone there is a path and in all there are attractions to stop, contemplate and enjoy. Although with some different features, in the villages many coincidences are noticed, such as the bushes full of coffee or the guadua emerging from the ground or transformed into art and housing.

The Department of Quindío, is part of the Colombian territory, declared heritage by UNESCO, as a Coffee Cultural Landscape.

At the side of the well-kept roads appear the details that represent the importance and beauty of Quindío. The uniform mountains, the coffee farms, the theme parks, the adventure scenes, the springs that feed rivers and streams. Valleys of infinite greenery such as Maravélez and Cocora; the latter, pierced by wax plates that touch the sky and point the way to Los Nevados National Natural Park.

Quindianos offer more and better services to the many travellers who frequently visit them. With the natural and cultural resources, a complete infrastructure has been consolidated, making tourism in Quindío a friendly experience to repeat over and over again.

A colourful panorama of coffee plantations, flowers, banana trees and guaduales emerges in Quindío. More than 2,000 plant species and a set of fertile lands, where a multi-coloured environment is created with a predominance of greens and the shelter of a temperature of 20 degrees Celsius in most of the department, except for scenarios such as the Cocora valley and the Los Nevados park.

So, this destination, which occupies less than 1% of the entire Colombian surface, opens paths through its lavish crops and extensive natural reserves, so that ecologists and landscape lovers have a space for observation and knowledge in front of the wonderful resources with which the geography of Quindío has.

More than 500 species of birds fly over there for their sighting, observation, and photographic record, it is one of the most pleasant activities during walks through various reserves such as Bremen in Finlandia, El Ocaso in Quimbaya, El Jardín in Genova and the Cocora valley itself in Salento.

There are also crystalline rivers and streams, cattle herds, and towering palms. They are the wax ones, once again a reference to the Cocora valley, the place where they grow and where at the same time a path is formed towards the cloud forest and one of the entrances to the Los Nevados National Natural Park, a wonderful reserve that Quindío shares with other departments.

Within the framework of the Coffee Culture, as a cultural heritage of humanity, a whole model of tourism development is developed in Quindío: The ROUTE OF COFFEE.

In the territory that Quindío occupies today there was a hard and skilled race in the art of goldsmithing. They were the Quimbayas, inhabitants of the region before the arrival of the Spanish conquerors. Today treasures and places that prove its existence and demonstrate how advanced its culture was, such as the Quimbaya Gold Museum in Armenia, are kept in memory of this race.

In the 19th century, Quindío was part of the territories sheltered by the Antioquia colonization phenomenon, a legacy that can be seen today, due to the customs, the routine of its inhabitants and the architecture of the towns. Quindío belonged until 1908 to the so-called sovereign state of Cauca and later it was integrated into Old Caldas.

And it was in 1966 that the department was created as such, with Armenia being its capital. Since then, Quindío has enjoyed full autonomy in its social and economic development, becoming attractive for tourists and investors.

It is because of all that interesting past that culture and history, as a tourist product, takes on a preponderant value in Quindío; because in addition this heritage is preserved through the architecture of the towns, museums and new places that are being born as an attraction and as a way of maintaining memory.

A pioneer in the development of these tourist complexes, the department of Quindío concentrates a large part of its potential with the offer of the National Coffee Parks in Montenegro and the National Park of Panaca Agricultural Culture in Quimbaya; likewise, with the Quindio Botanical Garden and the Recuca Coffee Culture Tour Park, both located in the jurisdiction of Calarca. In addition to being places of entertainment, these spaces largely recreate Quindian nature, resources, economy and traditions.

The contribution of the parks to the tourism sector is so important that their visit is a mandatory activity in the plans of travellers, who on their own, or through agencies, reserve the time necessary to obtain the services of the parks, regardless of that have already been visited on previous occasions. Because among other reasons, these places are frequently renewed to offer more surprises to visitors.

The parks have been consolidated as a tourist offer thanks to the resourceful work of the Quindianos, who devised a way to bring together in one place many of the reasons that make the entire destination attractive. Here, in addition to fun, there is learning, love for the region and irrepressible desires to return or tour the area are born. The parks emulate an itinerary through the department, exposing many of its characteristics in a successful way.

Physical activity without major risks and adventure taken to the extreme are two healthy ways to better feel the experience of being in Quindío. Canopy, mountain biking, horseback riding, rafting, kayaking, high ropes games and paragliding. Those are the most common sports in the green rooms of Quindiana.

The Barragan and La Vieja rivers, the Maravélez valley, the El Castillo hill and the sidewalk Pantanillo, among other places, frequently host adventurers who challenge the waters, winds, and heights to live experiences full of emotion, there are conjugated sensations of vertigo with the pleasure of looking at really beautiful places.

Several Quindío operators have a good infrastructure that guarantees the safe and fun practice of the different activities. El Quindío has been gaining privileged positions in the field of adventure sports, precisely because of the adequate organization and the different places suitable for practicing and that arise among the striking and green nature.

An interesting compilation of myths, dances and traditions enrich the folklore of Quindio, the destiny of workers who build their history from the selfless hustle and bustle of the muleteer in the mountains. The verses and stories are brewed there; dance and music; custom and tradition. Music such as the bambuco and the pasillo are part of the Quindian idiosyncrasy and a large part of the Andean region. The bambuco, of mestizo origin, is like a dance with a happy ending, in which the man courts her partner with subtle and elegant gestures, until at the end she surrenders to the incessant flirting.

The pasillo music is a variation of the European waltz in which the couple trades in a series of coordinated measures that increase in intensity as the melody advances. These rhythms are generally interpreted with guitar, tiple and bandola, among other instruments.

Legends are also part of the cultural inventory and popular wisdom. Some have transcended the limits of various departments and their appropriation occurs in each place, such as those of Mohan and Madremonte; others, such as the Cacique Calarca, are closer to the heritage of the Quindio. There have been stories about the Cacique Calarca that describe him as an indigenous warrior and with great treasures, which he infuriated when he learned that some indigenous people mixed his blood with the Spanish. The cacique Calarca died in the fight to preserve his race. The Legend has it that Guaicamarintia, a daughter of the chief, decided to bury him with all his wealth among the rocks of what is now the Peñas Blancas reserve in the municipality of Calarca.

It is how the Willys jeep is known when it is loaded. These enduring and picturesque Camper-type cars, of North American manufacture and remnants of World War II and the Korean War, were brought to the country at the end of the conflicts and when the United States decided to sell them at incredibly low prices because it had no longer needed them to its war purposes.

For the muleteers from the coffee-growing mountains, these vehicles arrived to facilitate their work and meet the needs of the community, especially in remote areas of urban centres.

Since then, the yipaos became a means of transportation and a measuring instrument, as people began to speak of a coffee yipao, a banana yipao or a corotos yipao, due to the vehicle’s load capacity. And today, after 70 years, the Willys continues to roam the country lanes and the coffee-laden mountains. So vital is the yipaos in the Quindian municipalities that its presence seems to have been personified as an emblem of the region. 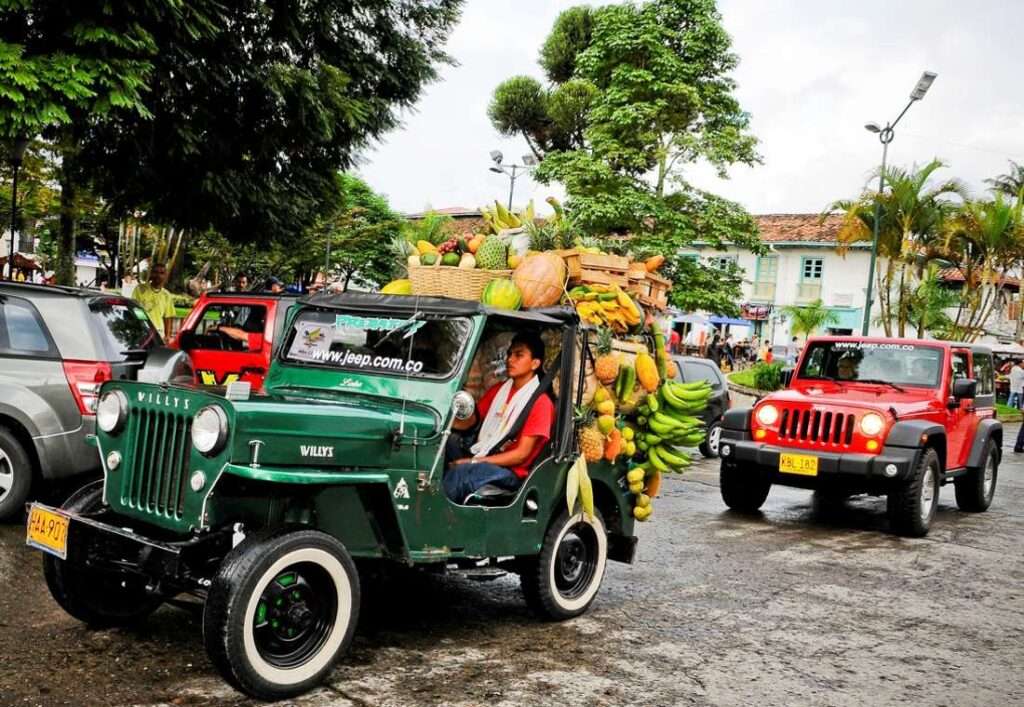 Just as there is no precision about the origin of coffee, some studies place it in Yemen and others in Ethiopia, there is also no certainty about the exact date when the first coffee trees were planted in the department of Quindío. However, everything seems to indicate that the cultivation began in the second half of the 19th century, almost simultaneously with the arrival of the new colonists from Antioquia.

Likewise, on the access route from the plant to Colombia there are versions that speak that its entry was given through the department of Cauca thanks to some monks; and others, that the entry was through Norte de Santander, which could be the most successful, given that the arrival of coffee to the American continent happened through the Caribbean islands and then through Brazil.

Mariano Ospina Rodríguez from Antioquia is responsible for the first crops in this department around 1867, a fact that was a reference for the first settlers of Quindio to arrive with knowledge about planting the fruit. The character named Simón López is attributable to the expansion of coffee crops in Quindio and the north of the Valley.

At the end of the 19th century, the prosperous economy emerged around the planting of the grain, making coffee one of the main Colombian export products. Although due to different circumstances the coffee boom has had its difficult moments, in Quindio there are always alternatives so that there is no talk of crisis and so that the coffee culture is always a fundamental engine of the region’s development. Proof of this is precisely the tourist activity with coffee as the main theme.

Projects To Invest In Quindío Colombia

Places To Stay In Quindío Colombia